February 2016 was a prosperous month for me. I doubled my weightlifting sessions and my body adapted to the increase with no problems other than the continued post-exercise hyperglycemia and minor soreness and stiffness of various muscles, tendons, fascia, and joints (all that is usual for weightlifters). It is well documented that exercise in persons with type 1 diabetes (T1D) is an additional challenge that does not improve glycemic control and in some worsens glycemic control (me for example after starting triathlon training in 2007). This month I decided to start treating the hyperglycemia with rapid-acting insulin after the first weightlifting session of day. I had postponed doing this last month because in the past my body had adapted to a change in exercise routine and I had expected the post-exercise hyperglycemia to resolve without treatment. Since I had to take an additional insulin injection to treat the hyperglycemia, I decided to add a small lunch with it to increase my protein intake. I thought some additional dietary protein might help me gain some muscle mass. Since starting weightlifting in December 2014, my body weight hasn’t increased and I thought it might have by now.

Just a brief paragraph about my experience with learning olympic weightlifting. On the surface it appears quite simple. There are only two lifts, the snatch and the clean & jerk, both use a barbell with rubberized bumper plates so that they can be dropped from overhead without damaging the weights or the floor. The snatch uses a wider grip on the bar and it is lifted close to the body straight up and overhead in one movement. The clean & jerk is two movements. The clean uses a narrower grip and the bar is lifted close to the body to rest on the shoulders with the hands under the bar as well. Then the jerk lifts the bar overhead. In both the snatch and the jerk, the arms must be quickly extended straight and held straight, otherwise the lift is failed.

I started lifting weights in December 2014 to try something different and to hopefully strengthen my back to alleviate recurrent back pain. I started with powerlifting which consists of the squat, bench press, and deadlift, but after two months my left elbow and shoulder were persistently very sore from the bench press. My son suggested I give olympic weightlifting a try. The components needed to be successful in olympic weightlifting are technique, strength, and mobility (flexibility). I possessed none of these qualities when I started. I have had to teach myself the technique by reading books and watching videos as there are very few weightlifting coaches in the US and none near my home. Suffice it to say, learning the technique has been my major emphasis. Initially, I had a rather quick improvement in the amount of weight I was able to lift. That is quite common and does not represent an improvement in strength as much as a familiarization with the movements. However since June 2015, I haven’t improved my weightlifting performance, until today. I improved my clean and jerk personal record to 180 lb. (YouTube), while my snatch personal record remains at 135 lb. I know much of the lack of progress is related to still learning the technique of olympic weightlifting. Prior to July 2015, I was, in essence, doing only a power snatch and clean even though my intent was to do the full lifts properly. A proper lift is divided into three parts, called pulls. The first pull is lifting the weight off the floor to just above the knee. The second pull is the acceleration phase which is somewhat like a jump off the floor. This brings the bar to the upper thigh in a clean, or to the top of the thigh in the snatch and the bar has enough momentum to continue upward. Learning the power movements is an important part of the learning progression, but prior to July 2015, I was stuck there and not able to progress to the full movement. A power movement is essentially the first and second pull. The bar is pulled high enough that it is essentially at the shoulders in the clean or overhead in the snatch with minimal need to dip under the bar to catch it. Achieving the full movement, involves learning the third pull. The third pull begins at full extension of the ankles, knees, and hips when you have done all you can to accelerate the bar straight up. The third pull is when you pull yourself under the bar before it falls too low to get under it. In other words, the third pull should be like greased lightning. This for me has been the most difficult thing to learn and I’m still working on it. To me it was counterintuitive to pull up followed immediately with a pull down. To appreciate olympic weightlifting, think about lifting a heavy weight up, getting under it, catching it, holding it, standing up with it, all in about one second. It happens so fast there is no time to think about your technique, you just do it and hope it all works out. You also have to learn how to bail the weight so you don’t drop it on your head when you miss a lift. It’s very challenging. But when you succeed, it’s very rewarding. I realize the above may not make much sense for those unfamiliar with the sport. We shall see what happens to my body weight and weightlifting performance over the next several months. Here is a picture of me catching the clean at 180 lb. (82 kg). Although it may look like I am in pain, I’m not.

Below are the actual blood glucose (BG) values and insulin doses for the month of February 2016. Note the AM rapid-acting insulin doses (Humalog) are about 2.5 times the PM Humalog doses. This is due to both the morning dawn phenomenon (increases AM insulin requirement) and the improved insulin sensitivity from the afternoon exercise (decreases PM insulin requirement). 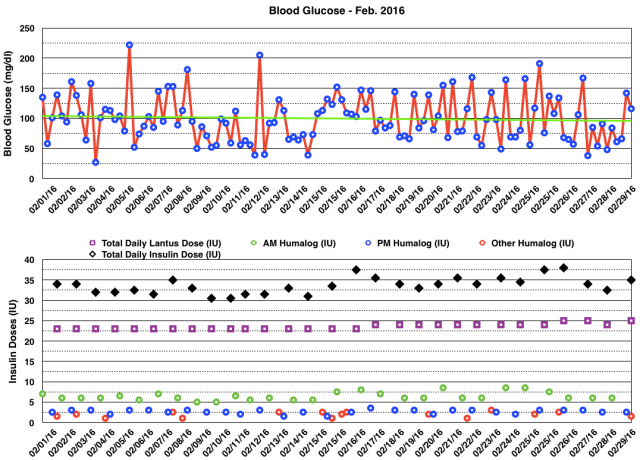 In the table below, my blood glucose results are presented in the same format as before. I had more hyperglycemia, but less hypoglycemia in the month of February compared to January 2016. Both basal and rapid-acting insulin doses increased to deal with the hyperglycemia. Despite this, my mean BG decreased to 100 mg/dl compared to 103 mg/dl in the previous month. Normal BG is about 83 mg/dl, but as mentioned in prior blog posts I have been unable to achieve a normal mean BG due to what I considered to be excessive hypoglycemia.

In the table below, my glucose variability data is shown. Blog post #5 explains the meaning of the variability measures in the table. Other than the increase in hyperglycemia and decrease in hypoglycemia, no surprises were revealed.

The figure below shows the one-week moving average for my BG since 2007. There continues to be some up and down movement of the moving average in a 30 mg/dl range, but there is less variability compared to times past.

The figure below shows my breath ketone results as measured by the Ketonix meter. This graph includes all measurements since June 2, 2015 (I was gifted the device by Michel Lundell at www.ketonix.com). Michel told me from his experience that values in the 20 – 80% range indicate nutritional ketosis. I seem to fall inside that range most of the time. I personally would not have bought this device because I had already determined that I could remain in nutritional ketosis over a 19 month period by measuring blood beta-hydroxybutyrate (BHB) levels (see blog post #6). However, I think it is a useful and less expensive tool for confirming nutritional ketosis compared to blood BHB. Urine ketone strips are even less expensive and are useful when first starting a ketogenic diet to confirm nutritional ketosis. In some but not all individuals, urine ketones can become negative even though the blood and breath contains ketones due to the kidney’s ability to improve its reabsorption of acetoacetate and thus not release it into the urine. This was discussed in my blog post #11. Also mentioned in that post was the fact that not everyone on a ketogenic diet needs to monitor their ketone levels by any method. It really depends on the reason for needing the ketogenic diet. 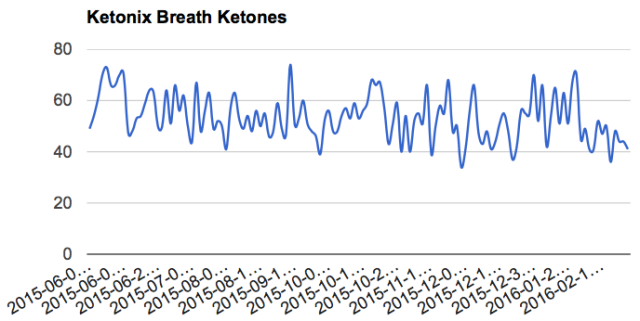 Overall, I was pleased with my results in February 2016. I had a total of 8 BG values < 51 mg/dl, none of which were symptomatic. I attribute this to brain utilization of ketones, but cannot prove it is not due to hypoglycemia unawareness as previously discussed in blog post #12. I’ll continue twice daily olympic weightlifting five days a week and aerobic exercise (swimming, cycling, walking) the other two days a week.

I'm a physician with type 1 diabetes who uses a ketogenic diet and exercise to manage my diabetes. The purpose of the blog is to describe the lifestyle changes I made that have resulted in near-normal blood glucose, reduction in hypoglycemic events and symptoms, and reduction in insulin doses. View more posts