If you have been reading my previous blog posts you’ll know that I have achieved better control of my type 1 diabetes (T1D) by simply changing the food I eat and continuing to exercise almost daily. The improvements I now enjoy are near-normal blood glucose (BG), less BG variability, near freedom from the symptoms of hypoglycemia (see blog post #12 for details), and freedom from diabetic complications. Although my exercise contributes significantly to my improvement by reducing insulin resistance, improving/maintaining muscle mass and strength, and providing a general sense of well-being, the change in diet that I made on Feb. 8, 2012 has had the greatest impact on my improvement. If I had to point to just one improvement that I value most, it would be near freedom from the symptoms of hypoglycemia. I had a total of three symptomatic hypoglycemic episodes in 2015. In addition, the eight hypoglycemic episodes since Feb. 8, 2012 have been different than those experienced before in that I am mentally alert and aware of what is going on and able to quickly treat the problem with glucose tablet(s). Also, none of them occurred while sleeping. I attribute this in part to rarely having to take a correction dose of rapid-acting insulin after dinner, the lower dose of basal insulin needed, and the lack of symptoms of hypoglycemia due to brain utilization of ketones as a result of nutritional ketosis from consistently following a ketogenic low carbohydrate high fat (KLCHF) diet. See blog post #12 for more details. Only those who have experienced hypoglycemic episodes can truly appreciate what a relief this improvement really is. This plus the other benefits of my KLCHF diet provide the motivation needed to continue it for the rest of my life. I am grateful for my current health status given what it was prior to Feb. 8, 2012 and how things might have turned out had I never discovered such a simple solution.

I want to thank my friend Jimmy Moore of The Livin’ La Vida Low-Carb blog and podcast who has been putting out valuable information on the internet about the benefits of a low carbohydrate diet since 2006. It was through Jimmy’s podcast that I came to learn about the work of Richard K. Bernstein, MD who has promoted and written about the use of the low carbohydrate diet for diabetes. In addition, he has lived with T1D since age 12 and has followed a low carbohydrate diet since 1969 with excellent results. He is currently 81 years old, still practicing medicine, and not only has he avoided complications of diabetes with normal blood glucose, but he reversed many serious diabetic complications including diabetic nephropathy, retinopathy, neuropathy, and heart disease. I can agree with Dr. Bernstein’s sentiment that treating T1D with a KLCHF diet feels like being released from prison (and I’ll add released from a death sentence for a crime not committed). So I thank Dr. Bernstein for helping me get “out of prison.”

I reviewed my results through Nov. 2015 in blog post #8, so I won’t repeat the explanations of the various parameters. I’ll just show the graphs and tables for 2015. For any values that need more explanation, I refer you to blog posts #8 and #10. 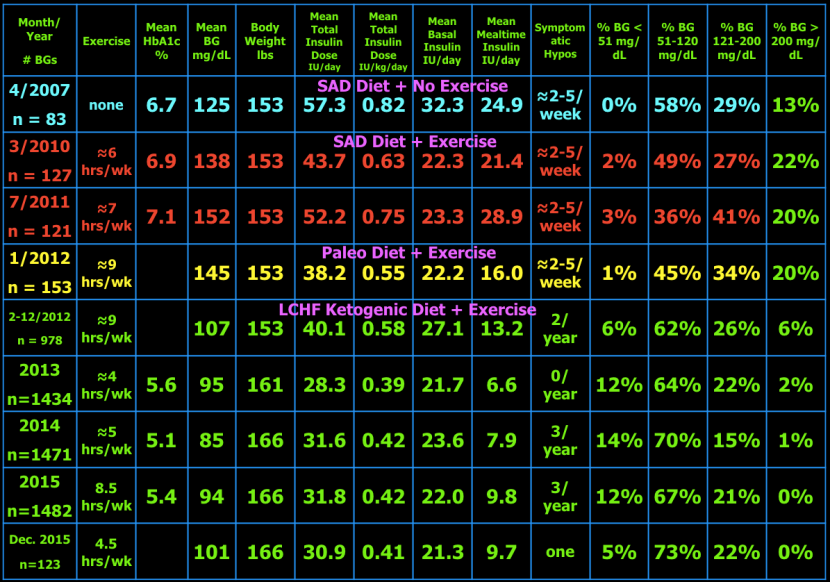 In December 2015, I managed to decrease the number of low blood glucose (BG) values (<50 mg/dl) to 5% with an increase in the number of acceptable BG values (70 – 120 mg/dl) to 73%. Mean and median BG values did increase however. Insulin doses were slightly less which could be explained by higher BG values. 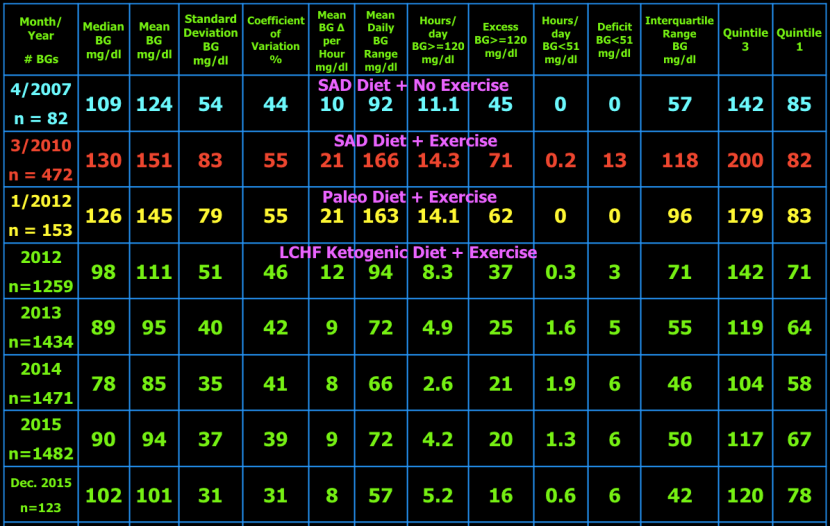 Actual BG values and insulin doses for December 2015 are shown below. 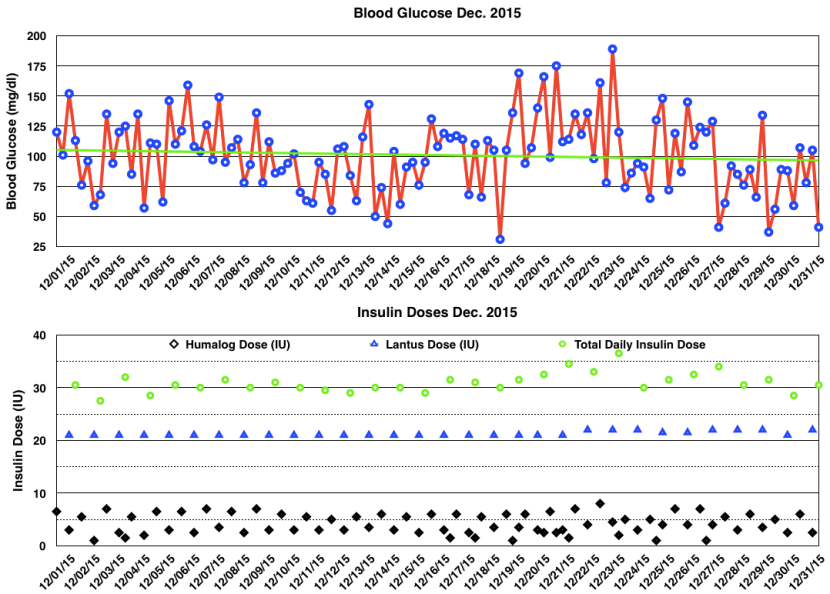 Insulin doses remained low and steady mainly as a result of fewer adjustments in insulin doses due to accepting a wider range of BG values (70 – 120 mg/dl) beginning in July of 2015. 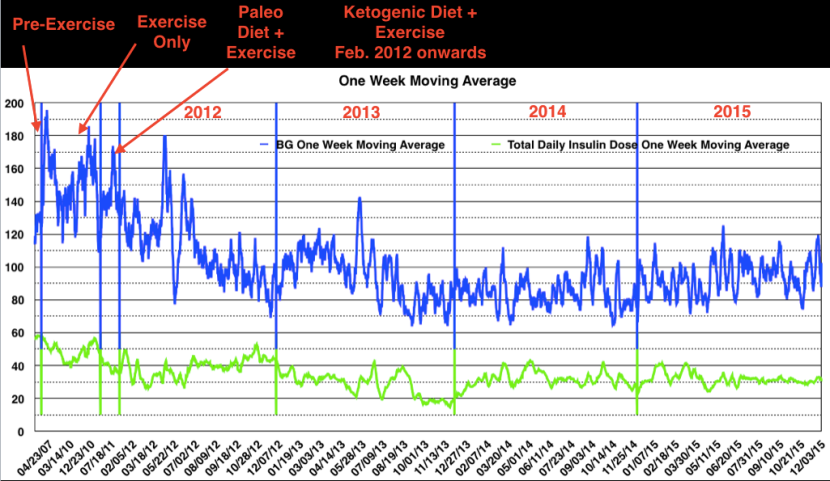 For the later half of 2015, variation in insulin doses decreased which I hoped would decrease BG variability as well. But variation in BG still remains despite keeping exercise type, intensity, and amount more stable and insulin doses more stable. Variability in BG will always be a feature of managing T1D with insulin injections. The goal is to keep BG variability as little as possible with BG as close to normal as possible while avoiding hypoglycemia.

I hope all those with diabetes can also achieve improving glycemic control and good health in 2016. Happy New Year!!!